Joseph Ruff D.O.B November 1982 is one of the most vocally proud members of the Philadelphia Proud Boys, showing off his Fred Perry every chance he gets. While he mainly associates with the Philly crew, he hails from Wilmington, Delaware.

He is known by the Instagram handle “RuffRants”, an allusion to the fact that he never shuts the fuck up. Indeed almost all of his social media profiles are clogged with lengthy tirades about whatever has him feeling heated that day. Anyways, here’s the type of content he likes. 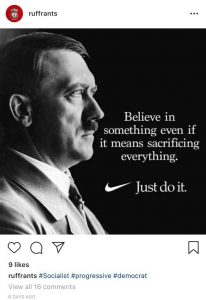 While he tries to portray himself as moderate, level headed conservative, this is betrayed by his rash anger that surfaces at the slightest provocation. He revels in a fight or an argument, wielding contempt like a baseball bat and lauding acts of violence online. He also is enamored with typical far-right figures like Milo Yiannopoulos, and he followed Gavin McInnes like a lemming, heaping praise upon him until the bitter end, even when McInnes jumped ship and threw all of his followers under the bus.

Joe is a frequent patron at Catherine Rooney’s, a bar in Wilmington. They even have a swear jar set up there, alluding to his constant vitriol. 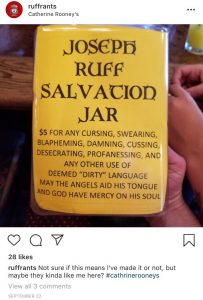 He is a huge fan of Liverpool FC and until recently associated with a fan club, though they thankfully took swift action and removed him when they were informed about his associations. Other communities of LFC supporters should be on the lookout for him.

He appears to be self-employed, through Duster’s Cleaning service.