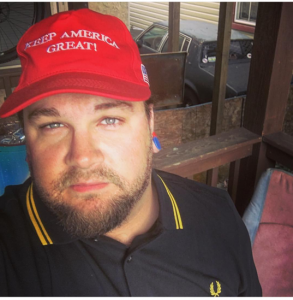 Kalin D.O.B September 1989, is a self-proclaimed Philadelphia area Proud Boy, though his official relations with the Philadelphia Proud Boy chapter is unknown. He might just be a wannabe Proud Boy, which is somehow even more pitiful. He lives a bit of a way out of the city in Palm, PA. Well immersed in the culture, he hails Gavin McInnes with a religious fervor.

His sense of humor veers from Ben Shapiro “own the libs” junk to straight up nazi shit.

He seems to be a low-level chump amongst any Proud Boy ranks, unless he’s just rocking the Fred Perry to be edgy. There’s a chance that he may be organizing with another chapter. Nonetheless, he knows what the Proud Boys represent and would love to be front and center of that.

But his sense of humor gives a clear indication of his moral compass- from expressing  genuine outrage that Family Guy can’t shit out homophobic jokes to the fanatical almost normalized idealization of Trump’s monument to racism. 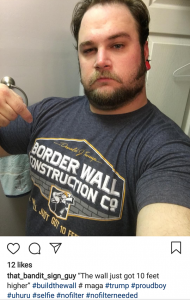 Kalin is a trainspotting hobbyist and has an Instagram to follow his rail hobby. People involved in this community or any potential clubs he may be a member of should be aware of what he stands for and the potential danger he may pose to minorities and the ones he deems political or cultural opponents.

He is also the drummer of a metal cover band (truly the zenith of talent and originality), called Hell Bent.

Do the other members of Hell Bent share and accommodate his views? Maybe contact them and find out.

We urge Hell Bent to remove Kalin from their lineup or they are complicit in allowing his hateful ideologies to fester and propagate. In the meantime, we would like to call upon people to boycott their shows and pressure venues to remove them from the bill.