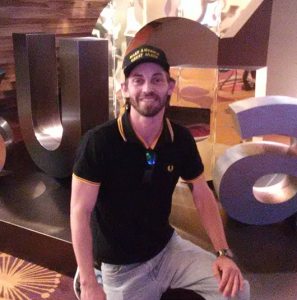 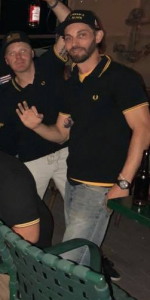 Mark Anthony Tucci D.O.B 07/08/1979 is a Proud Boy who is one of the main admins for the group “Under Review”, with John Williams and Thomas Savasta. While it posits itself as a group for chatting about sports and pizza, it is very clearly just a front group for discussion between Philadelphia area Proud Boys and their allies. This is apparent in Mark’s advertisements for the group on Instagram, where he tags it with all sorts of Proud Boy hashtags. I guess he figured no one would be looking? 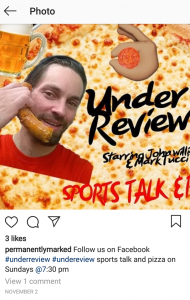 While he hangs out with his Proud Boy buddies, he thankfully keeps a less active street presence. Ideally it stays this way. He praises the violence and conspiracies typical of the far right.

He seems to have had lofty goals in the Proud Boys, as he even equipped himself for some personal protection for street rallies that he couldn’t bother to attend. After all, why would he need a helmet with his gang’s insignia on it for working in a Pizza shop?

Not only did mark try to help run a Proud Boy media outlet- oddly enough he also ran a fake Howard Stern account on twitter, likely capitalizing on swaths of Stern’s edgy fans who didn’t know better. HE amassed 17,000 followers, and a had a massive and discreet platform to spread bigoted bullshit. This also was one of the first accounts to come for me when I began outing the Philly Proud Boys. The account has now been banned.

On his employment- he was known to be employed at Aldo’s Pizzeria, in Bustleton, PA. After a call-in campaign, they eventually stopped taking calls, then claimed to have fired him long ago. This was obviously false, as Mark live streamed from work the morning he was exposed. They still claim to have let him go, though it is likely they are lying to protect him. Further confirmation on his employment is needed. Nonetheless, wanting a piece of the alt-right grift pie, a gofundme was set up in his name, claiming he wasn’t employed. If he wasn’t actually fired, this is clear evidence of him trying to use the sympathy of others to scam them out of money. Disgraceful. (An archived version of the fundraiser can be found here: http://archive.is/kP37u)