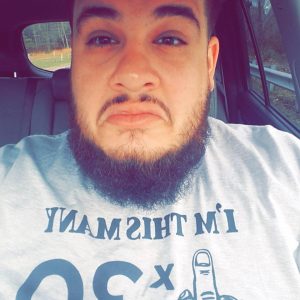 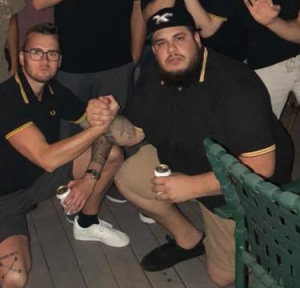 Nick Magner lives in Sicklerville, New Jersey, though his main affiliation is with the Philadelphia Proud Boys. He is one of the more politically minded ones- in that he seems less driven by the social-drinking club aspect of the group. He has attempted to maintain an active presence on the street.

His first known appearance in Philadelphia in a far-right political context was when he showed up to the Occupy I.C.E encampment late at night with Zach Rehl, in an attempt to troll protesters, asking bad faith questions and generally being a nuisance and getting in people’s faces.

He was also a persistent presence at the November 17th rally in Philadelphia, where he livestreamed his entire attendance.

Nick’s main outlet of activity is through a webshow called Major League Liberty, where he goes by the alias “Jersey”.

Major League Liberty is a typical far-right libertarian talk show where a bunch of boring conservatives circlejerk and drone on for hours. While it posits itself as having a libertarian focus, they adhere to typical bigoted far-right viewpoints, calling for the government to exercise force on their enemies and shitting themselves over myths of “Islamization” or immigrant “invasions”. Islamization is a notorious dogwhistle for Islamophobic white nationalists who use entirely baseless fears of Muslim conquest of the west and implementation of Sharia law as a rallying cry for establishing a white ethnostate. They also seem to adhere to the conspiracies of migrant caravans being organized invasions- the same conspiracies that drove Robert Bowers to murder 11 people at a Synagogue near Pittsburgh.

Major League Liberty has a particular affinity for the Proud Boys and cement themselves as a Far-right propaganda outlet. They present a danger as their softer tone can help pull more moderate conservatives towards dangerous, violent far-right ideologies. Major League Liberty praises Proud Boys for their violent acts and help aid the culture of militant violence that pervades the far right and allows them to carry out their constant attacks on innocent people.

Nick represents a pipeline for radicalizing people further to the right, a road that inevitably leads to bigotry and violence.

He was last known to work as a counselor in the Oaks Integrated Care network in Sicklerville, NJ. When contacted, they stated that he was not currently employed within that network. It is particularly concerning to think he has a career in counseling- one that requires a great deal of empathy- if he willingly associates with a designated hate group and lauds their violent activities and rhetorical.