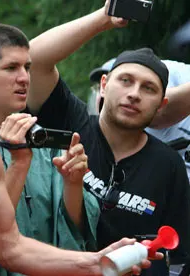 Aaron Wolkind-Whallon D.O.B March 1984, is the vice president for the Philly Proud Boys, and seems to be an active organizer for the group.

He first joined up through a seamless membership process of commenting on another Proud Boy’s Instagram post, in the summer of 2018. His Instagram name is the predictable “AaronOfTheWest”, though he has also previously used the handle “ProudBoyAaron”.

He seems to have very quickly risen through the ranks, cultivating a friendship with Zach Rehl, who is one of the more active organizers and politically motivated agitators within the group. He can be seen in a video drinking with Zach and some other members.

Aaron is diehard and serious about the Proud Boys, particularly as a political body. He is less into it for the fun and drinking and revelry, he wants to be part of a far-right fighting force. He attended the November 17th rally organized by Zach, some threepers, and other Proud Boys and attended by all manner of far-right buffoons.

Aaron’s temper and intentions become clear when he can be seen on livestream threatening to mace a heckler despite being perfectly safe behind a line of bike cops (who, to no one’s surprise, have no issue with that… imagine if someone on the other side was threatening to mace him?)

Aaron trains in MMA fighting. He is known to frequent Retro Fitness in Philadelphia, but his main training ground seems to be Quintella MMA, a martial arts training gym in Folsom, PA. They can be contacted at @QuintellaMMA on twitter- perhaps it would be good to let them know that a member of a far-right hate group trains there, practicing the violence he very clearly intends to commit upon others.

He is also employed by Aerzen USA, who are based in Coatesville, PA. He is a Technical Support Specialist- let them know they have an active organizer of a hate group in their midsts.