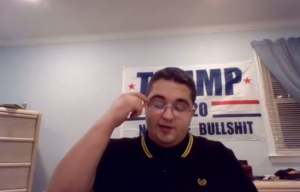 Thomas Savasta, D.O.B October 1995, also known as “Big T” acted as a representative for the Philly Proud Boys in the security chat leading up to the rally they staged on November 17th, and is also an admin of the aforementioned “Under Review” facebook group, where he livestreamed himself sporting his Fred Perry shortly before being outed as a member of the Proud Boys. There, other Proud Boys joked that he would be doxed. Oops.

In the security chat he acted as one of the main liaisons between the other organizers and the Philadelphia Proud Boys. He clearly announces himself as such, leaving no ambiguity. He participated in this chat alongside notoriously violent Proud Boy Alan Swinney (thread on AS), and other far right figures who cited “Semitism” as one of the key problems facing society, hearkening to the virulent antisemitism at the core of the conspiracy obsessed far-right. He volunteered himself as a medic for the rally and discussed the legality of bringing weapons. He also levies praise on Joey Gibson, who he hoped would show up to the rally. Gibson is the notorious leader of Patriot Prayer, based out of Portland, an increasingly violent far-right street gang that often invites Neo-Nazis to fight alongside them as they roam the streets looking for blood to shed. 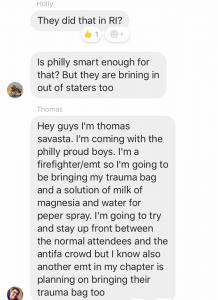 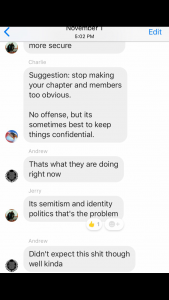 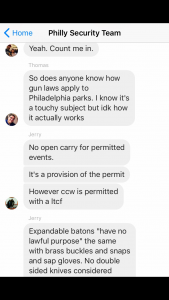 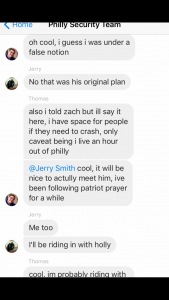 Thomas was known to volunteer as an EMT with Doylestown Fire Company No. 1. While there are rumors that he resigned following being outed as a Proud Boy, this is not confirmed. 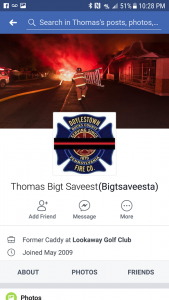 He seems to be intent on keeping his life as an EMT and a Proud Boy separate- he certainly knows the consequences of his actions and associations and has a guilty conscience. He tried to threaten a comrade through twitter (unsuccessfully) to keep from being outed.

Thomas ended up chickening out of the November 17th rally, but he has been more active recently, even appearing at a national Proud Boy event in Washington, D.C. on May 20th where leadership announced a lawsuit against the SPLC on behalf of the entire group. How did a bottom of the barrel chump like him get an invite to that?

He also fancies himself as a rapper named “Big T”. One of his songs can be seen where, where he is absolutely excessive in his use of the N word.
https://www.youtube.com/watch?v=TNrWDUYmw8E

I suggested we play his wonderful music back to him over the Loudspeaker at the Candace Owens event. He wouldn’t even look at us. Poor boy. Not so proud at all.

As mentioned before, Thomas is a volunteer EMT- can someone who aligns with a hate group be trusted to save lives? Even if he claims not to be bigoted, his presence in the emergency response community provides a platform for hateful far-right ideas to spread and fester, and he may very well allow the space for someone who is selective in the lives they choose to save. Someone like Neo-Nazi and EMT Alex Mcnabb (You can read more about him here: https://www.cnn.com/2018/12/13/us/virginia-first-responder-racist-remarks/index.html) who fantasized about letting black people die in his care.

His work history is spotty and hard to pin down, he is known to either be working as an Auto mechanic at an unspecified Fred Beans dealership in the Doylestown area.