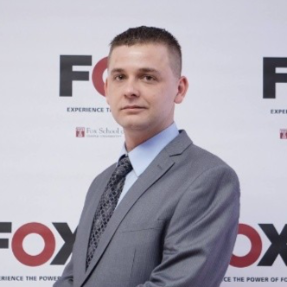 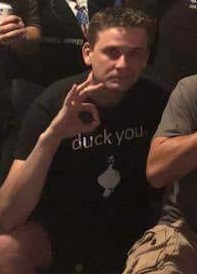 Zach Rehl is a Philadelphia Proud Boy and longtime far-right organizer, he is the president of the Philadelphia proud boys. Zach began on his own path of inviting bigots into Philadelphia before linking up with the Proud Boys. He is best known as the admin and lead organizer for the facebook page, Sports, Beer and Politics, That group can be read about again here.

In fact, here is a handy flyer that was produced about him prior to the November 17th rally he organized, which was posted up in the area of the rally. 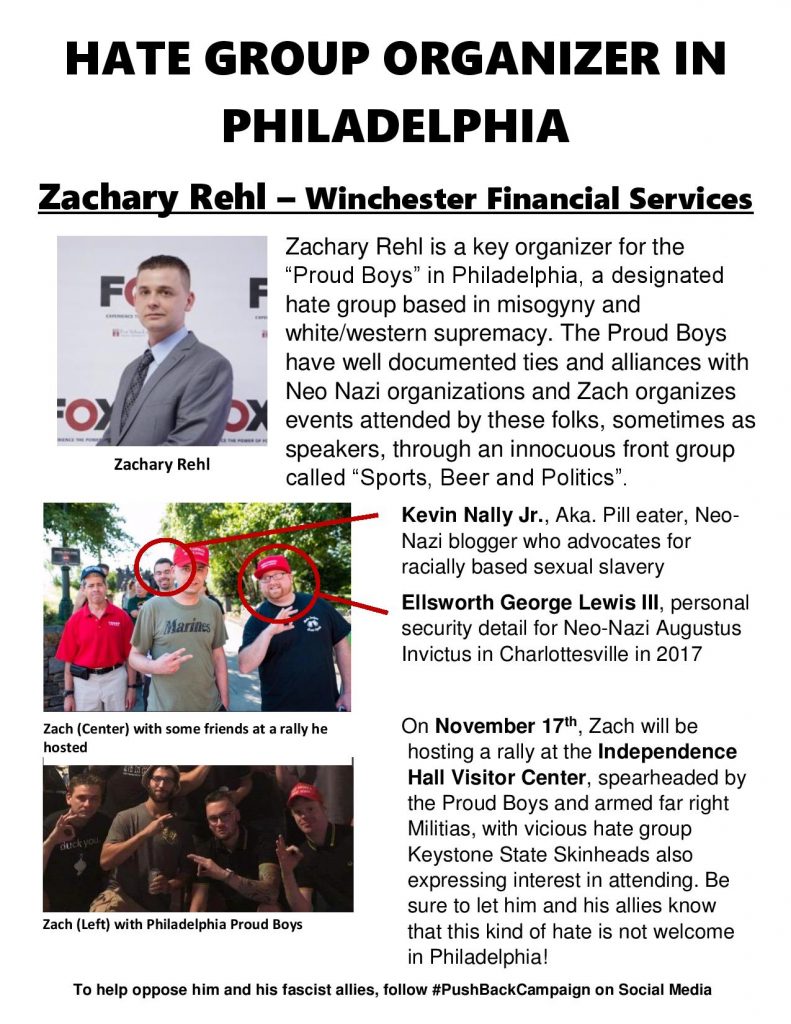 As one of the main admins on Sports, Beer, and Politics, Zach loves to share bigoted memes and other shitty content and provides a platform for the far-right to organize, chat, and spread their toxic ideology.

As a summary, Zach began organizing with the far-right in 2017, where he primarily worked alongside a group known as the Fraternal Order of Alt Knights, defined officially as a paramilitary wing of the Proud Boys. This group in Philadelphia’s affiliation with the actual Proud Boy Chapter is unknown, but they had a much more prominent street presence first. They would show up to rallies organized by Zach and show up to counter-protest liberal or leftist demonstrations. Their final battle was on the streets of Charlottesville at the deadly Unite the Right Rally in 2017, where they acted as the personal security detail of famous holocaust denier and Neo-Nazi Augustus Invictus. The group fell apart after that, but Zach reared his head up about a year later to put together more rallies that invited the far-right to Philadelphia.

The highest numbers he was able to pull was at his rally on July 2nd, 2017 in Philadelphia. This was attended by the alt-knights along with other vicious bigots, such as William Clark. Clark is the U.S. leader of Arktos Media, the largest Far-right publishing house in the world, and one of the leaders of white nationalist group, Identity Evropa.

Also in attendance were people like Kevin Nally, who writes under the blog “Asian Aryan”, who espouses particularly vile viewpoints and ideas like race-based sexual slavery. Some of the attendees of Zach’s events in the past can be read about here.

He also rallied alongside SPLC designate hate group (he just can’t seem to avoid those!) ACT for America, who spread virulent and absurd conspiracies about Muslims in America.

His next event was a pro-police event where Philadelphia Police brutalized and arrested several counter-protesters. Zach is known for latching onto soft conservative issues like support for Police and “Free Speech” to invite racists, fascists, and other far right figures to march alongside him. He made his allegiance to the Proud Boys clear following this event, where he can be seen burning an Antifa flag (that was stolen from a counter-protester and handed to him by Police) in a video to the tune of a truly awful punk song about being a Western Chauvinist, a Proud Boy catchphrase that they use to define their ideology.

In this video you can hear Zach falsely making claims Antifa was attacking “The Cameraman” @00:19 these false claims provoked the police to engage against the anti-fascists. It just so happens that Cameraman was an independent journalist named Bastiaan Slabbers

The Cameraman was never attacked, in fact this isn’t the first time Zach weaponized his friends in the police department to attack anti-fascist activists. In this video you can also see the police tossing the antifa flag to Zach 0.1:34, later Zach would claim Victory for taking this flag that was handed to him by the PPD.

This has happened with the far right in Philadelphia in the past, where police gave a flag to Ellsworth George Lewis as a consolation prize during a rally (This is stated by him in a Breitbart article which will not be linked).
He was an active presence in the security chat leading up to the November 17th rally in Philadelphia, where he coordinated with the Proud Boys and various militia groups, trying to organize entry/exist strategies for other Proud Boys.

In the aftermath of the disastrous infighting that rally wrought alongside its pitiful attendance, Zach claimed to be retiring from organizing rallies. This proved to be untrue, as Sports Beer and Politics immediately went on to organize a rally in May in Philadelphia alongside some militia chumps. This ultimately fell apart due to infighting, but it still stands that Zach cannot be taken at his word.

He goes on to claim that there are no alt-right associations with SBP. This is a flat out lie and several official Proud Boys attended his November rally. Furthermore, SBPs’ ties with the alt-right have been well documented. 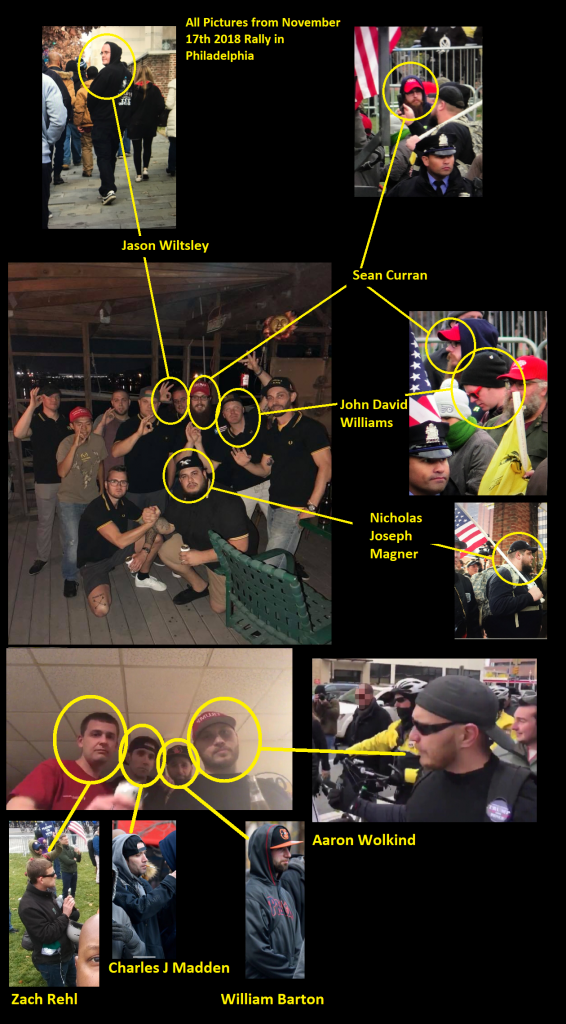 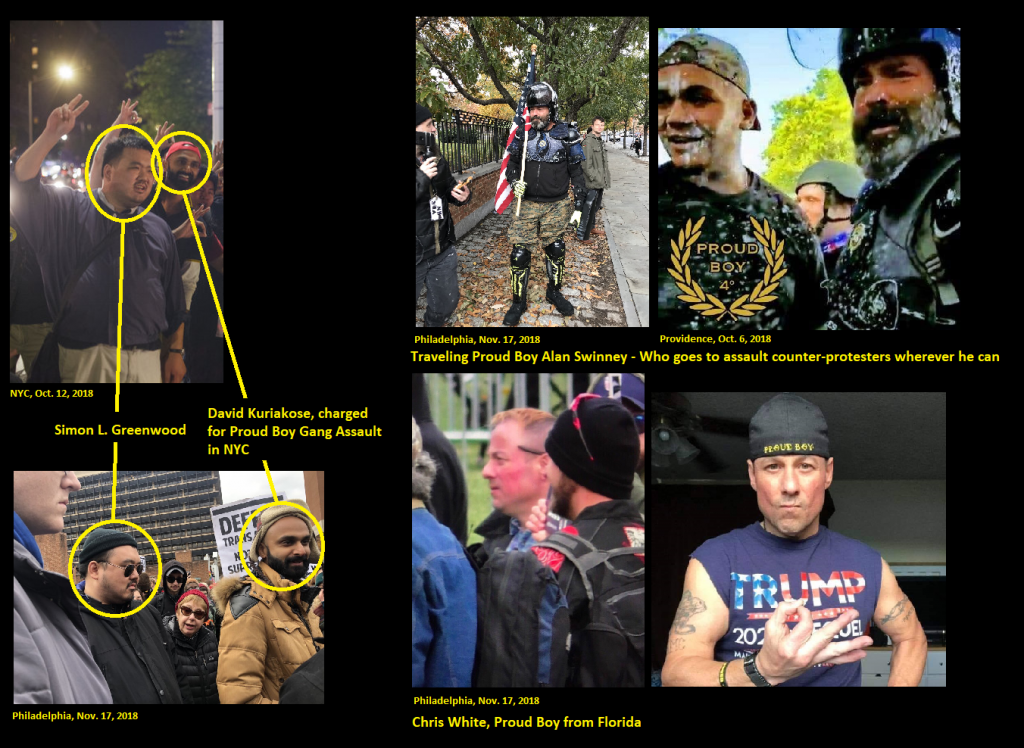 Not only does he have connections with all manners of far-right figures, he has direct connections to the Philadelphia Police Department, which can be read about here. They will happily march into the fray and brutalize people to protect and serve him specifically.
Considering the fact that he loves licking cop boots so much, you’d think he would be better at following the law?

The conclusion that can be drawn from this is that Zach is a chronic liar who will try to weasel his way out of any situation through lies and deceit. He should not be trusted by anyone, not even people on his side.

His last known workplace is as an independent insurance agent with “Winchester Financial Services”. This was after his employment at New York Life was terminated in August 2018, a company which ironically uses the slogan “The Company You Keep”. Very little information can be found on Winchester Financial services, and it is possible that Zach started this company himself, or he created it as a fake front to cover his true employment.

For friends, potential employers, family- even if you like Zach, even if you are a scumbag who agrees with his abhorrent politics or if you tolerate them and enable him- you should at least beware of the fact that he is a serial and habitual liar. He is a snake and not a single word he says can be trusted- he will lie and manipulate and do whatever he needs to cover his ass.